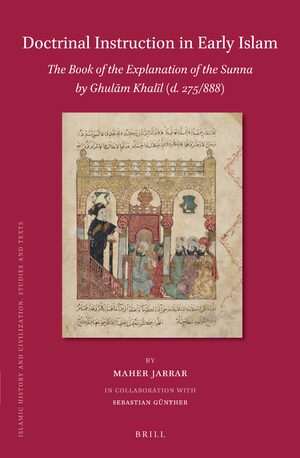 Series:  Islamic History and Civilization, Volume: 174
Editors: Maher Jarrar and Sebastian Günther
This pioneering study casts important new light on key issues in the development of dogmatic instruction in early Islam, as it examines the creed written by the Basran and Baghdadi Sunni preacher Ghulām Khalīl (d. 275/888). It includes a critical edition of the Arabic text and an English translation of what appears to be one of the earliest statements of religious beliefs in Islam. In particular, this book argues convincingly that this influential text was authored by the ninth century Ghulām Khalīl rather than the Hanbali preacher of Baghdad, al-Barbahārī - a claim repeatedly made by modern scholars, both Western and Eastern. The present publication broaches multi-layered themes with the aim of specifying the parameters of this “Muslim Creed” in terms of the composite relationship between its content and its origin. In addition, it tackles the important question of what may have led modern Salafis to embrace the doctrinal positions of this particular statement of belief and practice and, perhaps more importantly, to pursue its “institutionalization” as a religious orthodoxy.
E-Book (PDF)

€119.00$143.00
​
Add to Cart
Maher Jarrar (PhD 1989 from the University of Tübingen) is Professor at the American University of Beirut, both at the Civilization Studies Program and at the Department of Arabic. He has published numerous books and articles in the fields of Islamic studies, Arabic literature, and literary criticism.

Sebastian Günther (Ph.D. (1989, University of Halle-Wittenberg) is Professor and Chair of Arabic and Islamic Studies at the University of Göttingen. He has published extensively on the intellectual and religious history of Islam.
Acknowledgments
Notes on Transliteration and Style
Abbreviations

3 The Third/Ninth Century: The Veneration of Aḥmad b. Ḥanbal and the Proliferation of Creeds

4 Toward Common Ground: The People of the Sunna and the Community

Translation of The Book of the Explanation of the Sunna

Those interested in Islamic religious and intellectual history, early Islam , Sunni creeds and dogmas, the formation of Sunni orthodoxy and the Ahl al-sunna wa-l-jamāʿa, the Hanbali legal/theological school, and early foundational sources of modern Salafis and Islamists.