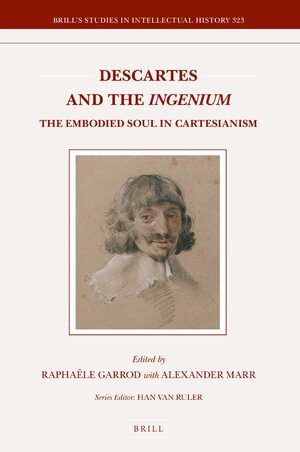 Descartes and the Ingenium

The Embodied Soul in Cartesianism

Series: Brill's Studies in Intellectual History, Volume: 323
Rédacteurs en chef Raphaële Garrod and Alexander Marr
Descartes and the ‘Ingenium’ tracks the significance of embodied thought ( ingenium) in the philosophical trajectory of the founding father of dualism. The first part defines the notion of ingenium in relation to core concepts of Descartes's philosophy, such as memory and enumeration. It focuses on Descartes’s uses of this notion in methodical thinking, mathematics, and medicine. The studies in the second part place the Cartesian ingenium within preceding scholastic and humanist pedagogical and natural-philosophical traditions, and highlight its hitherto ignored social and political significance for Descartes himself as a member of the Republic of Letters. By embedding Descartes' notion of ingenium in contemporaneous medical, pedagogical, but also social and literary discourses, this volume outlines the fundamentally anthropological and ethical underpinnings of Descartes's revolutionary epistemology.

From  129,00 $
​
Add to Cart
Raphaële Garrod, Ph.D. Cantab (2010), is Associate Professor of Early Modern French at the University of Oxford and a Fellow of Magdalen College. She authored Cosmographical Novelties in French Renaissance Prose: Dialectic and Discovery (2016), and co-authored Logodaedalus: Word Histories of Ingenuity in Early Modern Europe (2019).

Alexander Marr is Reader in the History of Early Modern Art at the University of Cambridge and a Fellow of Trinity Hall. His recent books include Logodaedalus: Word Histories of Ingenuity in Early Modern Europe (2019) and Rubens’s Spirit: From Ingenuity to Genius (forthcoming from Reaktion Books, 2021).

Introduction: Descartes Re-Imagined: Ingenuity Before and Beyond Dualism
Raphaële Garrod

5 The Post-Regulae Direction of ingenium in Descartes: Toward a Pragmatic Psychological Anthropology
Denis L. Sepper


7 Ingenium between Descartes and the Scholastics
Igor Agostini