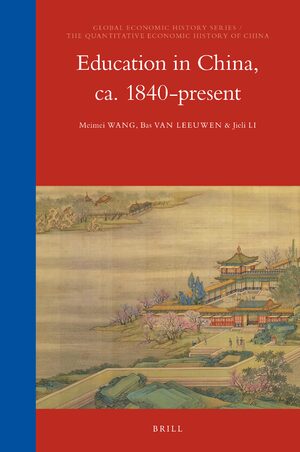 Authors: Meimei Wang, Bas van Leeuwen, and Jieli Li
In Education in China, ca. 1840–present Meimei Wang, Bas van Leeuwen and Jieli Li offer a description of the transformation of the Chinese education system from the traditional Confucian teaching system to a modern mode. In doing so, they touch on various debates about education such as the speed of the educational modernization around 1900, the role of female education, and the economic efficiency of education. This description is combined with relevant data stretching from the second half of 19th century to present collected mainly from statistical archives and contemporary investigations.
E-Book (PDF)

€149.00$179.00
​
Add to Cart
Meimei Wang, Ph.D. (2019), Utrecht University, is a research fellow of Chinese modern economic history at the Chinese Academy of Social Sciences. She has published many articles on education in China, including Spatial-economic development: The effect of urbanization on education in China, 1890-present (Routledge, 2020).

Bas van Leeuwen, Ph.D. (2007), Utrecht University, is a senior researcher at the International Institute of Social History. He has published many articles on education, global history, and China.

Jieli Li, BA, is an assistant researcher at the International Institute of Social History. She has published various articles on education and income, including Education since 1820 (OECD, 2014).
List of Figures and Tables
Reigns of Emperors in the Late Qing Dynasty
Chinese Terms

2 Quantifying the Enrolment in Education
2.1 Literacy and Attainment
2.2 Enrolment during the Qing Dynasty
2.3 The Modern Education System