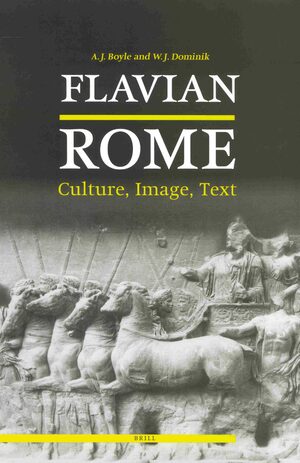 Editors: Anthony Boyle and William J. Dominik
The politics, literature and culture of ancient Rome during the Flavian principate (69-96 ce) have recently been the subject of intense investigation. In this volume of new, specially commissioned studies, twenty-five scholars from five countries have combined to produce a critical survey of the period, which underscores and re-evaluates its foundational importance. Most of the authors are established international figures, but a feature of the volume is the presence of young, emerging scholars at the cutting edge of the discipline. The studies attend to a diversity of topics, including: the new political settlement, the role of the army, change and continuity in Rome’s social structures, cultural festivals, architecture, sculpture, religion, coinage, imperial discourse, epistemology and political control, rhetoric, philosophy, Greek intellectual life, drama, poetry, patronage, Flavian historians, amphitheatrical Rome. All Greek and Latin text is translated.
E-Book (PDF)