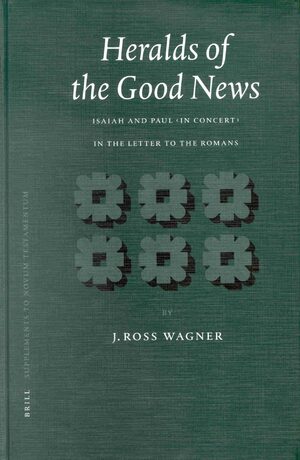 Heralds of the Good News

Isaiah and Paul "In Concert" in the Letter to the Romans

AutorIn: J. Ross Wagner
In this text-critical, literary, and theological investigation of Paul's interpretation of Isaiah in Romans, it is argued that Paul's citations and allusions evince sustained and careful attention to significant portions of Isaiah, in concert with other scriptural voices.
Through a radical rereading of Isaiah, Paul appropriates these prophetic oracles as prefigurations of his own mission to Gentiles while simultaneously appealing to Isaiah as a witness to God's continuing fidelity to Israel.
The book examines each of Paul's citations and allusions to Isaiah, situating them both within the milieu of early Jewish interpretive practices and within the context of Paul's unfolding argument in Romans. This volume contributes to the current debate about early Christian interpretation of scripture by tracing the complex and dynamic interrelationship in Paul's letter of Scripture, theology, and mission.

This publication has also been published in paperback, please click here for details.
E-Book (PDF)

€ 204,00$ 253,00
​
In den Warenkorb
J. Ross Wagner, Ph.D. (1999) in Religion, Duke University, is Assistant Professor of New Testament at Princeton Theological Seminary. He has published articles in New Testament Studies, The Journal of Biblical Literature, and The Catholic Biblical Quarterly.
' All in all, this is a well-done study that makes a significant contribution to the growing literature on Paul’s use of the Scriptures of Israel. [..] ..this book should be considered in any future discussion of Paul’s use of the Scriptures of Israel, especially but not only Isaiah.'
Kenneth Litwak, Review of Biblical Literature, 2006
' Wagner’s study is essential reading not only for scholars interested in Paul’s use of Scripture but for anyone involved in the study of Paul’s thought. [..] Wagner’s book remains one of the best books to appear in many years on Paul’s use of the Jewish Scriptures.'
Christopher Stanley, Review of Biblical Literature, 2006
' …einen diskussionswürdigen Beitrag zur Debatte über das Konzept der Intertextualität bei Paulus…'
Florian Wilk, Theologische Literaturzeitung, 2005.
' Wagner’s dissertation constitutes a solid piece of work, in which the great importance of the book of Isaiah for Pauline theology is taken very seriously…Wagner writes with the clarity and maturity of a veteran scholar, not often seen in dissertations (and this is also a tribute to Moody Smith, Wagner’s doctoral father). Not only is an important theme in an important epistle clarified, Wagner has also presented readers with a model in the study of inter-textuality. Readers will also be impressed with Wagner’s skills in handling ancient languages, including not only the usual languages of the Biblie, but Syriac as well.'
Craig A. Evans, Bulletin for Biblical Research, 2002.

Scholars and students, interested in the use of scripture in early Judaism and Christianity, the history of the interpretation of Isaiah, the Septuagint, Pauline theology, and Christian origins.