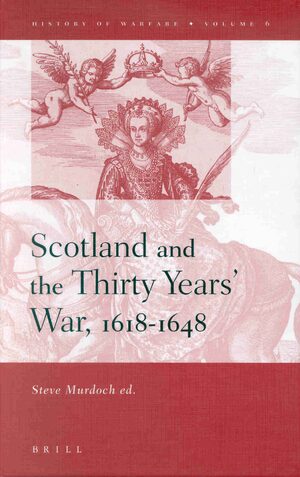 Editor: Steve Murdoch
This volume deals with the entanglement of Scotland in the Thirty Years War (1618-1648), discussing both the diplomatic and military aspects of the conflict that led to Scottish involvement in the heart of the Holy Roman Empire. To the Scots, the war was linked to the fate of the Scottish princess, Elizabeth of Bohemia, rather than the politics of central Europe per se.
In three sections, the 12 authors have illuminated the political processes that led to the participation of as many as 50,000 Scottish troops in the war. The official alliances of the Stuart regime, the independent diplomacy of the Scottish Parliament and the actions of numerous well placed individuals at various European courts are all shown to have had a bearing on this important episode of European history.
Hardback

Steve Murdoch Ph.D. (1998) in History, University of Aberdeen, lectures in Scottish History at the University of St Andrews. His monograph is entitled Britain, Denmark-Norway and the House of Stuart, 1603-1660 (Tuckwell, 2001).
"It firmly places Scotland within a context of European diplomacy and war, a context that is often overlooked by historians of ther period, including this reviewer. It will never again be possible to imagine that while Europe was torn apart by warware, the Scots watched from the sidelines." Keith M. Brown, Innes Review, 2005. "While the sheer number of Scots fighting abroad is impressive (50,000 at least from 1618 through 1648) it is the specificity with which these are treated that strikes the reader. Foreign archives supply much of the evidence presented here. Contributors with a proven facility in the records of the various countries that participated in the wars of religion have been chosen to represent that theatre and the Scots' role therein. This international effort is testimony to the excellence of the Aberdeen history programme. By bringing to light Scotland's international influence in the seventeenth century, the contributors have enhanced our understanding of the Scottish nation." Mark C. Fissel, Scottish Historical Review, LXXXIII, 2: No 216, 2004 "'All told this is a topflight collection of essays that should provide a springboard for much future research. By highlighting the Scots' role in the Thirty Years' War, Murdoch et al. have made an important contribution to our understanding of a neglected aspect of the Thirty Years' War, one I hope will be more fully developed in the years to come." Glenn S. Sunshine, The Sixteenth Century Journal, XXXV, 1: No 216, 2004 "These essays contribute significantly to our knowledge of Scottish Military and diplomatic involvement in the Thirty Years' War. The study shows that the Scottish contribution to the conflict was more significant than previously believed. The study also makes a valuable contribution to the growing knowledge of warfare during the first half of the seventeenth century." William Young, The Journal of Military History, vol. 67, no.1, 2003 "'Murdoch rightly highlights the need for closer examination of the domestic impact on Scotland itself. Equally, some of the contributions in this volume raise questions about concepts of national identity, other overlapping cultural loyalties, actual levels of understanding across a multitude of dialects and languages, and the extent to which individual participants had a sense of the overall dimensions of the war and its political repercussions beyond their personal network. In the long run, work on questions such as these will substantially affect the way we regard not just 'British' identities, but also self-perceptions across early seventeenth-century Europe as a whole." Thomas Munck, Scottish Economic and Social History, vol. 22, part 1, 2002 "Despite the great military significance of the Scots during the first half of Sweden’s “Age of Greatness” it is evident how little research the Scottish side has filtered through to Swedish readers and academics. A golden opportunity to amend this lack is presented here and to obtain a useful perspective on a central part of Swedish military history during the Thirty Years’ War." Lars Ericson, Militärhistorisk Tidskrift, 2002
Preface / Allan I. Macinnes Abbreviations List of Illustrations List of Contributors Introduction / Steve Murdoch 1 1 Scottish Ambassadors and British Diplomacy 1618-1635 / Steve Murdoch 27 2 Alternative Diplomacy? Scottish Exiles at the Courts of the Habsburgs and their Allies, 1618-1648 / David Worthington 51 3 The Scottish Parliament and European Diplomacy 1641-1647: The Palatine, The Dutch Republic and Sweden / John R. Young 77 4 A note on Scottish Soldiers in the Bohemian War 1619-1622 / J. V. Polisensky 109 5 Scots in the French and Dutch armies during the Thirty Years' War / Matthew Glozier 117 6 Scotland: Sweden's Closest Ally? / Alexia Grosjean 143 7 New Perspectives: Alexander Leslie and the Smolensk War, 1632-4 / Paul Dukes 173 8 Scottish Soldiers, Poland-Lithuania and the Thirty Years' War / Robert I. Frost 191 9 Robert Monro: Professional Soldier, Military Historian and Scotsman / William S. Brockington 215 10 Wish You Were Here? Scottish reactions to 'Postcards' home from the 'Germane Warres' / Dauvit Horsbroch 245 11 German reactions to the Scots in the Holy Roman Empire during the Thirty Years' War / Hartmut Ruffer, Kathrin Zickermann 271 Index 295
All those interested in the history of Thirty Years' War, diplomatic history, Scottish history, British history, European history, Scandinavian history as well as the general historian of the 17th century.