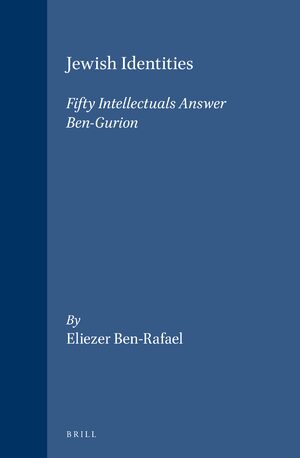 Author: Eliezer Ben-Rafael
Who and what is a Jew? Is there any common denominator between an ultra-Orthodox rabbi of an Israeli North African community and a Berkeley academic of the Movement for a Secular and Humanistic Judaism? Do Jews the world over convergre and emphasize their unity or do they share contrasting concepts of collective identity? Part I of this book presents a systematic discussion of Jewish identities in this era of (post)modernity. The opportunity is offered by a set of invaluable texts, which appear in Part II. These texts about Jewish identity were invited, in 1958, by Ben-Gurion from 50 intellectuals - rabbis, writers, scientists and lawyers -, from the Diaspora and Israel, representative of the principal streams of contemporary Jewish thought.

This book is also available in paperback.
Hardback

€67.00$83.00
Add to Cart
Eliezer Ben-Rafael, Ph.D. (1974) in Sociology, University of Jerusalem, is Weinberg Professor of Sociology and the President of the International Institute of Sociology. He has published extensively on ethnicity and language, and is the author of Identity, Culture and Globalization (Brill, 2001-2002).
All those interested in the sociology of identity, contemporary transnational diasporas, Judaism, Israel studies, the relations of Israel and the Diaspora.