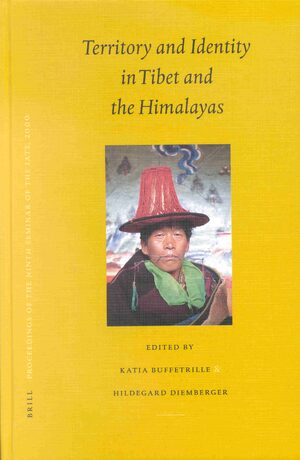 Proceedings of the Ninth Seminar of the IATS, 2000. Volume 9: Territory and Identity in Tibet and the Himalayas

Editors: Katia Buffetrille and Hildegard Diemberger
Which places does Tibet include? Are people Tibetan merely because of living in those places? Territory and Identity are notions that are widely present in academic and popular discourses on Tibet. In 1992 a group of French and Austrian researchers who had studied some of the mountain deities and sacred landscapes of Tibet began meeting to discuss the links between territory and identity in Tibetan culture. Eight years later an interdisciplinary group of scholars met in Leiden in Holland to consider these questions in more detail.
This book contains some of their findings, based on case studies carried out across the Tibetan and Himalayan regions. The authors look at the role of local deities, kinship, economy, politics and administration using approaches from across the social sciences to try to work out how a community constructs and reconstructs its idea of itself, and how its members think about and are affected by the land on which they were reared.
Hardback

€125.00$155.00
Hardback
Add to Cart
Katia Buffetrille holds a Ph.D. in Social Anthropology. She works as a Researcher at the École Pratique des Hautes-Études. She is the author of Pèlerins, Lamas et visionnaires. Sources orales et écrites sur les pèlerinages tibétains (Vienna, 2000). Hildegard Diemberger holds a Ph.D. in Social Anthropology. She has a research post at the Mongolia and Inner Asia Studies Unit, University of Cambridge and is a research associate of the Austrian Academy of Sciences. She is the co-author of the translation of dBa' bzhed (Vienna, 2000).
Those interested in the history, anthropology and culture of Tibet; social historians