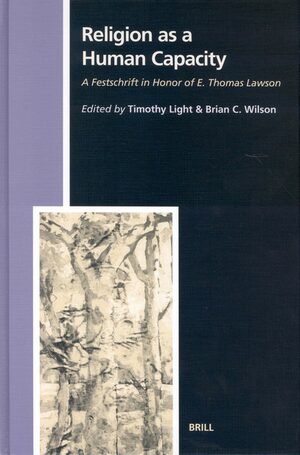 Religion as a Human Capacity

A Festschrift in Honor of E. Thomas Lawson

Editors: Timothy Light and Brian C. Wilson
Prepared in honor of E. Thomas Lawson, the essays in Religion as a Human Capacity represent diverse points of view in the study of religion today. Part I, “Theoretical Studies,” offers a broad range of cognitivist theoretical explorations, while Part II, “Studies in Religious Behavior,” presents cutting-edge applications of cognitive and other contemporary theories to religious data. This volume celebrates Lawson’s critical contributions to cognitive studies of religion and the degree to which his ultimate goal of scholarship as a search for truth is matched by those who have been his colleagues and been influenced by him. Religion as a Human Capacity will be of interest to all those concerned with theory and method in the academic study of religion
E-Book (PDF)

€198.00$247.00
​
Add to Cart
Timothy Light, Ph.D. (1974) in Linguistics from Cornell University, is Professor of Comparative Religion at Western Michigan University. His fields are Chinese religions and theory and method in the academic study of religion. Most recently he has published on the phenomenon of syncretism.
Brian C. Wilson, Ph.D. (1996) in Religious Studies from UC Santa Barbara, is Associate Professor and Chair of Comparative Religion at Western Michigan University. His most recent book is Reappraising Durkheim for the Study and Teaching of Religion Today (Brill, 2002), edited with Thomas A. Idinopulos.