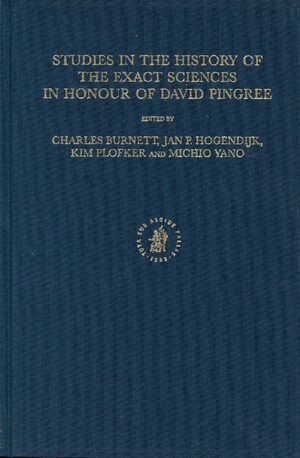 Series:  Islamic Philosophy, Theology and Science. Texts and Studies, Volume: 54
Editors: Jan P. Hogendijk, Kim Plofker, Michio Yano, and Charles Burnett
This collection of essays reflects the wide range of David Pingree's expertise in the scientific texts (above all, concerning astronomy and astrology) of Ancient Mesopotamia, Greece, India, Persia, and the medieval Arabic, Hebrew and Latin traditions. Both theoretical aspects and the practical applications of the exact sciences-in time keeping, prediction of the future, and the operation of magic-are dealt with.
The book includes several critical editions and translations of hitherto unknown or understudied texts, and a particular emphasis is on the diffusion of scientific learning from one culture to another, and through time.
Above all, the essays show the variety and sophistication of the exact sciences in non-Western societies in pre-modern times.
Hardback

€373.00$464.00
Hardback
Add to Cart
Charles Burnett, Ph.D. (Cantab.), Professor in the History of Arabic/Islamic Influence in Europe, at the Warburg Institute, University of London, specialises in the translations of Arabic texts into Latin in the Middle Ages, and has collaborated with David Pingree in editing a 12th-century Latin translation of an Arabic astrological text. Michio Yano, D.Litt. (Kyoto), Professor of the History of Science and Indian Culture, at Kyoto Sangyo University, Japan, specialises in astronomy and astrology in Indian, Islamic and Chinese culture. He is a founding editor of Sciamvs, and has edited the Arabic and Chinese versions of Kushyar ibn Labban's Introduction to Astrology. Jan P. Hogendijk, Ph.D. (Utrecht), Associate Professor of Mathematics at Utrecht University, Netherlands, has published extensively on the history of mathematical sciences in medieval Islamic civilization. Kim Plofker, Ph.D. (Brown University), Visiting Scholar in the Department of the History of Mathematics, Brown University, specialises in Indian and Islamic mathematics and astronomy, and in humanities computing areas related to the study of non-Western texts and manuscripts.