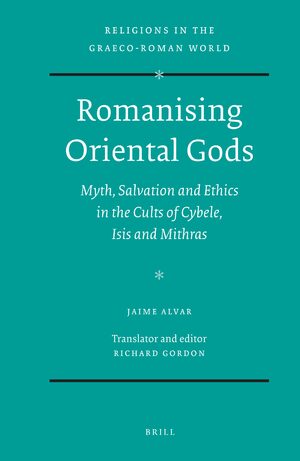 Myth, Salvation and Ethics in the Cults of Cybele, Isis and Mithras

Author: Jaime Alvar
The traditional grand narrative correlating the decline of Graeco-Roman religion with the rise of Christianity has been under pressure for three decades. This book argues that the alternative accounts now emerging significantly underestimate the role of three major cults, of Cybele and Attis, Isis and Serapis, and Mithras. Although their differences are plain, these cults present sufficient common features to justify their being taken typologically as a group. All were selective adaptations of much older cults of the Fertile Crescent. It was their relative sophistication, their combination of the imaginative power of unfamiliar myth with distinctive ritual performance and ethical seriousness, that enabled them both to focus and to articulate a sense of the autonomy of religion from the socio-political order, a sense they shared with Early Christianity. The notion of 'mystery' was central to their ability to navigate the Weberian shift from ritualist to ethical salvation.
E-Book (PDF)

€200.00$249.00
​
Add to Cart
Jaime Alvar, PhD (1980) in Ancient History, Complutense University, is Professor of Ancient History at Universidad Carlos III de Madrid. He has published extensively on Iberian protohistory and Graeco-Roman religions, and is currently director of the Instituto de Historiografia "Julio Caro Baroja"
Translator and editor: Richard Gordon, PhD (1973) Cambridge UK, is honorary professor of Religionsgeschichte der Antike at the University of Erfurt, Thüringen. He has published mainly on religious currents in the Roman Empire and Graeco-Roman magic.
"It investigates the reception, transformation, and socioreligious roles of the cults of Mater Magna (Cybele), Isis and Serapis, and Mithras in the complex culture of the Roman Empire and their relationship to emergent Christianity."
New Testament Abstracts 53:2
Historians and teachers of ancient religion, the Roman Empire and Early Christianity, and classical philologists