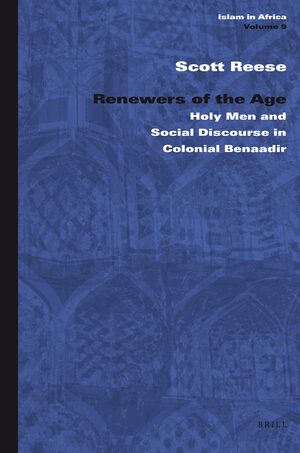 Renewers of the Age

Author: Scott Reese
Studies of nineteenth and twentieth century Islamic reform have tended to focus more on the evolution of ideas than how those ideas emerge from local contexts or are disseminated to a broad audience. Using the urban culture of southern Somalia, known as the Benaadir, this book explores the role of local ʿulamāʾ as popular intellectuals in the early colonial period. Drawing on locally compiled hagiographies, religious poetry and Sufi manuals, it examines the place of religious discourse as social discourse and how religious leaders sought to guide society through a time of troubles through calls to greater piety but also by exhorting believers to examine their lives in the hopes of bringing society into line with their image of a proper Islamic society.
E-Book

€107.00$132.00
​
Add to Cart
Scott S. Reese, Ph.D. (1996) in History, University of Pennsylvania, is Associate Professor of Islamic History at Northern Arizona University. He has published extensively on Islam in Africa including the edited collection The Transmission of Learning in Islamic Africa (Brill, 2004).
'Subtle and daring, this is a sociological perception of the role of religion-as-asocial-construct, of its implication in the socio-politico-intellectual discourse in Somalia. It is a book, however, that can prove useful to thinkers studying the shaping of social discourse by any hegemony - be that political, religious, economic, or a handy combination of all these'.

Stavros Nikolaidis, in Journal of Oriental and African Studies, Volume 22, 2013

'Renewers of the Age will prove to be a useful reading to those interested in the local history of Somalia and of Africa in general. But its attentive methodology also makes it a required reading for those who are interested in the role of religious literature in modern and pre-modern Islamic societies. Its approach to texts as active elements in social lives is of extreme interest, and it is an approach that, it is to be hoped, will be applied in future works on Somalia and Ethiopia, taking into account also the problem of readership of works in Arabic in non-Arabic speaking countries, which is only sketched in Reese’s work.